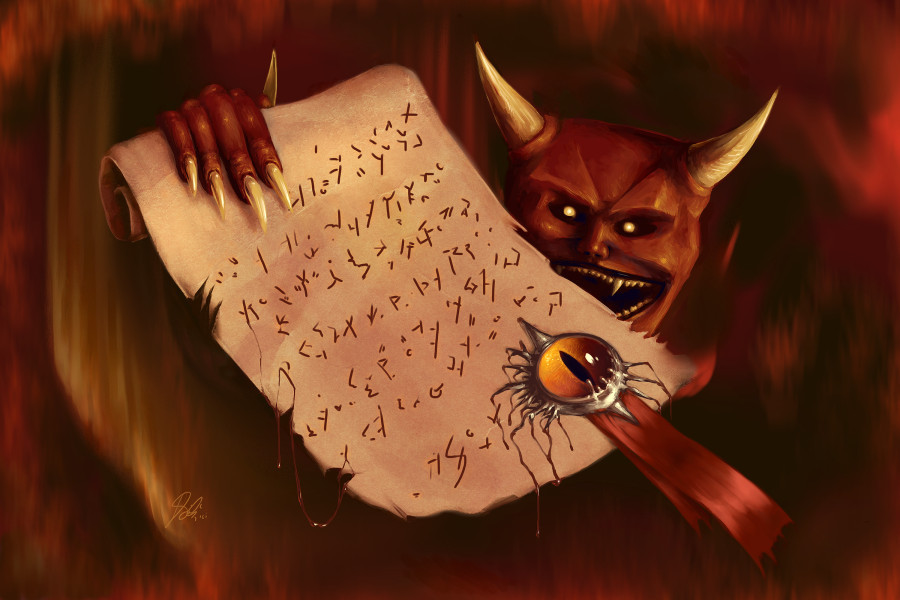 The moment you met me you signed a contract. You did not realise that you did this but you most certainly did. You did not see the contract and nobody mentioned it either but your interaction with me meant that you accepted my offer and you supported it with valid consideration and as a consequence a binding contract was entered into between you and I. How can you accept an offer that you did not know about? That does not matter because the applicable law to this contract is the law of my kingdom, not wherever you may be domiciled. Our offer was simple. We would give you a perfect love and in return for this perfect love you would provide us with perfect fuel. Straightforward isn’t it? I was even so kind as to explain to you how this perfect love would look and I gave you many examples didn’t I? Ah yes, I can see that it is all starting to make sense to you isn’t it? The charm, the seduction, the gifts, the love-making, the trips, the beautiful words, the moving letters, the little gestures and the promises of it lasting forever were all examples and manifestations of this perfect love. I kept my part of the bargain. I adored you and gave you this perfect love without restraint.

You began well and furnished me with that perfect fuel, high-grade and in vast quantities as you admired me as I impressed you with the repeated exhibitions of my perfect love but then you breached the contract. You failed to keep up the provision of the fuel. I must admit I was staggered when you did this. After all, you only had one obligation and it was not that difficult because you did it at first. It was not as if I asked something of you which you could not deliver. You began at the start to provide me with this perfect fuel but then you let it diminish. I even allowed you a chance to remedy your breach by giving you a further chance, I warned you as to your conduct but you failed to heed these fair and reasonable warnings. You have only yourself to blame but that is usually the case. Your breach meant that certain clauses were activated and it is no good complaining that they are unfair or that they are penalties because they are not. They are genuine pre-estimates of my loss based on your diminution and cessation of my fuel. Accordingly, I was able to invoke the clause allowing me to apply Punitive Manipulation and thereafter seek redress through the provision of negative fuel. It is no good bleating about how much trouble that caused you, you brought the problem on yourself and you have, as ever, only yourself to blame for this action. Was it an error of judgement on your part? If I was being charitable I would say that it was but most likely you did it because you thought, you could do what you wanted and escape this binding contract. Not only was I allowed, in accordance with the terms of this contract to apply Punitive Manipulation I was also fully entitled to invoke other provisions contained in the schedule. What do you mean you did not see a schedule? You did not need to did you because you said you would always give me what I needed, so why would I have to show you something when you evinced an intention to abide by the contract? Honestly, I think you take me for a fool at times. Thus I was able to rely on the clauses involving the following: –

I was divested of my obligations towards you and therefore I was able with immediate effect to bring about the cessation of Love Bombing. On the advice of my crack legal team it was also necessary for me to mitigate my position. I duly did so by engaging my Lieutenants, releasing my Crows and best of all I was allowed to seek fuel from alternative sources, both primary and supplementary with no fear of retribution from you. It is no use complaining, that is not going to resolve the situation. I suppose you really ought to have got a good lawyer on your side at the outset but then just like he has the best tunes, the devil has the best lawyers as well. See you in court.

You Are The One

This website uses cookies to improve your experience while you navigate through the website. Out of these cookies, the cookies that are categorized as necessary are stored on your browser as they are essential for the working of basic functionalities of the website. We also use third-party cookies that help us analyze and understand how you use this website. These cookies will be stored in your browser only with your consent. You also have the option to opt-out of these cookies. But opting out of some of these cookies may have an effect on your browsing experience.
Necessary Always Enabled
Necessary cookies are absolutely essential for the website to function properly. This category only includes cookies that ensures basic functionalities and security features of the website. These cookies do not store any personal information.
Non-necessary
Any cookies that may not be particularly necessary for the website to function and is used specifically to collect user personal data via analytics, ads, other embedded contents are termed as non-necessary cookies. It is mandatory to procure user consent prior to running these cookies on your website.
SAVE & ACCEPT
MENU